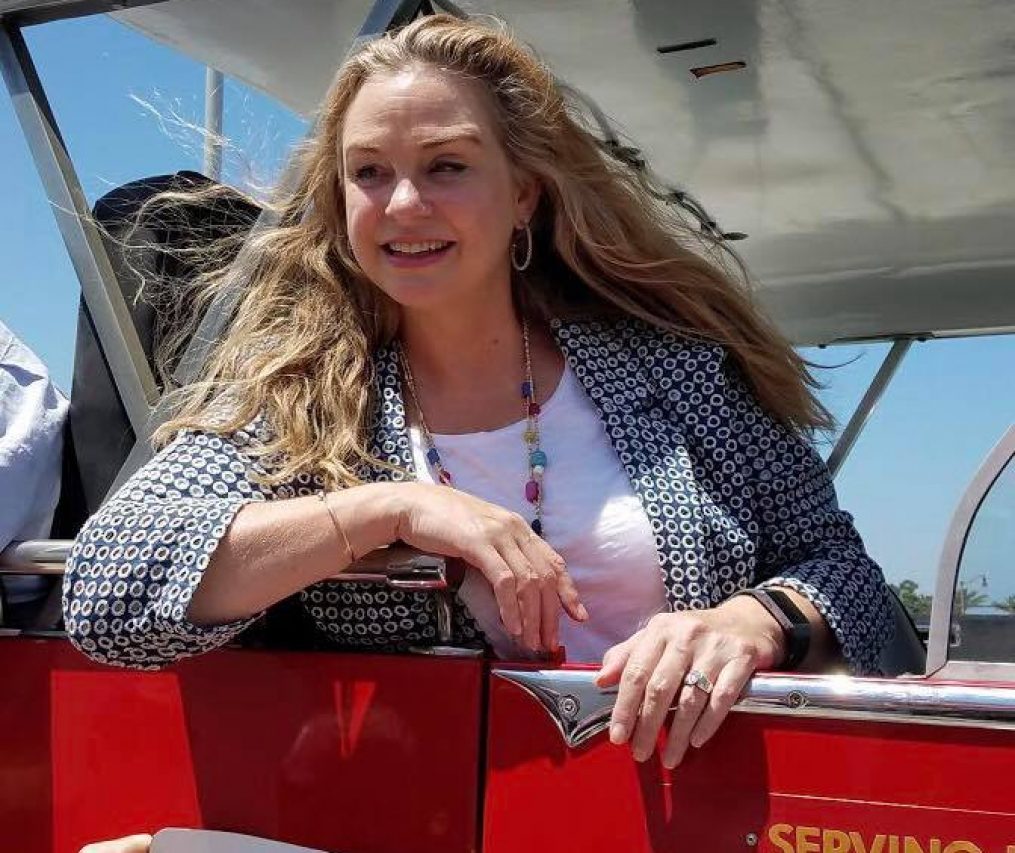 I was having dinner with my family to celebrate the Jewish New Year when I learned that Supreme Court Justice Ruth Bader Ginsburg had died.  As my friend Lauren Johnson Norris posted on Facebook, “According to Jewish tradition, a person who dies on Rosh Hashanah, which began tonight, is a tzaddik, a person of great righteousness. We found that very comforting. So strange to be eating these apples and honey with this sadness.”

Salt water next to our apples and honey.

Mixed with our sadness is the acute realization that the tragic loss of Justice Ginsburg means that a woman’s right to control her own body, already under extreme siege, is more in danger now than at any time since Roe v. Wade was decided nearly 50 years ago.

Now, more than ever, we must ensure that our representatives, at every level of government, are fully committed to protecting our fundamental reproductive rights.

I want to share with you the statement released today by my friend and Irvine Community Services Commissioner Lauren Johnson-Norris.  It eloquently puts into words what I and many other women are thinking and feeling at this difficult and pivotal moment in our history:

“Justice Ginsburg is an icon for many women, especially women lawyers, because she dedicated her professional life to a singular focus in moving the law toward equality for women. She entered spaces where women were not welcomed and won time and again, not just because of her brilliant mind and persuasive advocacy, but because she stood on the side of equality. As a jurist, she sought to build consensus but, when that was not possible, she provided an essential voice of dissent that spoke truth to power.

The loss of Justice Ginsburg on the United States Supreme Court is devastating at a time when women’s fundamental rights to reproductive health care is under attack. The right of a woman to make autonomous decisions about her own body is the core of her fundamental right to equality and privacy. As a lawyer, mother, and advocate for women, I know that in order to drive equality, we must commit fully and actively to reproductive rights and healthcare for all.”

RBG gave us all she could. She brought us this far. Now it’s our time to carry on the fight, in her name and in her memory, for ourselves, our mothers, our sisters, and our daughters.

There’s lots of work to do.

Happy Women’s Equality Day, commemorating the 1920 adoption of the Nineteenth Amendment prohibiting denying the right to vote on the basis of sex.

We’ve come a long way, but much more needs to be done!

While we’ve had historic victories, we still have much to do to make the world a better and more equal place for women and girls everywhere.

Crucially, studies have shown that the more women who serve in legislatures the stronger family-friendly policies are enacted.  Women legislators focus more on passing legislation that lifts women and children out of poverty, ensures fair pay and family-friendly workplaces, and expands quality childcare access. Women legislators are also more likely to strengthen laws that protect the victims of sexual assault.

Sex discrimination and inequity remains serious issues in our workplaces. Lawmakers must work to ensure that women in the workplace get equal pay for equal work, and they must address the racial pay gap between white women and women of color.

So while we celebrate our victories and honor our mothers and sisters whose courage and persistence made these victories possible, we should use this day to recommit to the fight for equality and to make the world a better and more equal place for women and girls everywhere!

The question of what a woman should do when she is pregnant but does not want to raise a child is extremely personal for me.

It is the question that my birth mother, unmarried and 16-years-old, faced fifty one years ago.

This was before People v. Belous (1969) and Roe v. Wade (1973) established a woman’s fundamental right to decide whether to give birth.

Just a few months before I was born, California Governor Ronald Reagan signed the “Therapeutic Abortion Act,” which changed California’s criminal code to permit the termination of pregnancy by a physician when there was substantial risk that its continuation would “gravely impair the physical or mental health of the mother” or when the pregnancy resulted from rape or incest.

I am not sure whether my birth mother would have qualified for a legal abortion under the “physical or mental health” requirements of the new law, but she could have risked terminating her pregnancy by illegal means – as more than 100,000 California women did every year before the Act’s passage. In fact, Governor Reagan said that he signed the new law to prevent the death and injury of thousands of California women each year from illegal and dangerous “back alley” abortions.

My birth mother decided not to have an abortion, and instead gave me up for adoption.

Of course, I’m happy with her choice – I would not be here otherwise. I was raised by parents who wanted and were able to care for me. I have also had the incredible joy of being able to thank my birth mother for her decision – reuniting with her and my two younger brothers several years ago.

I received a great gift from my birth mother’s decision – but I would not have wanted her to have been forced by the government to give birth to me despite being unable at that time to properly care for a child.

Whether or not to have an abortion – or whether to give a child up for adoption – is a deeply personal and often painful decision for a woman or couple to make, and it is a decision they have to make based on their own faith and values, not someone else’s – and certainly not the government’s.

Our current representative — and my opponent — for the 68th Assembly District, Steven Choi, believes otherwise.

During his political career, Choi has earned a 0% rating from Planned Parenthood.

When seeking the Republican nomination for the Assembly, he stated that “he is pro-life, and he wants to protect all lives, including those of the unborn.”  He has tried to use his position in the legislature to bring back the days when thousands of women each year in California were forced to make the horrific choice between having unwanted children or illegal, dangerous abortions.  He recently voted against a bill in the California legislature that would provide young people with basic contact information about reproductive health. He has been endorsed by groups that are aiming to do to California women what has been recently been done to the women of Alabama, Arkansas, Georgia, Kentucky, Louisiana, Mississippi, and Utah — subjecting them to the most restrictive abortion laws in decades.  And he has received thousands of dollars in contributions from groups outside our district that are determined to deny women the right to control their own bodies.

As your representative for the 68th Assembly District, I’ll fight to protect and defend women’s access to the full range of reproductive health care services.  That’s why I’ve been endorsed by Women in Leadership, a bipartisan political action group committed to electing women who share their commitment to women’s rights and freedoms in reproductive health, and why I’ve been endorsed by Fund Her and the Womens Political Committee.

We can’t allow politicians like Steven Choi to deny women basic human rights such as access to safe and affordable reproductive health care or allow the government to intrude into this most personal of decisions.

That’s why I need your help now to keep the decision whether to give birth a deeply personal choice and not the government’s.

You can learn more and join me at VoteMelissaFox.com.

Irvine Community Services Commissioner Melissa Fox speaks to City Council on behalf of OC veterans, urging the City Council to set aside land in the Great Park as a final resting place for Orange County veterans